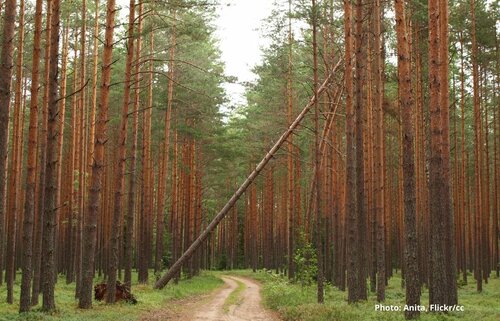 Almost a year ago, avid readers of Fern’s guest blogs learned that Estonian environmental NGOs were under pressure for challenging those spearheading the destruction of some of our country’s most precious habitats.

The NGOs had called for the removal of Estonia’s Deputy Secretary of Wildlife, Marku Lamp, for abusing his office and undermining the battle for Estonian conservation. Raul Kirjanen, CEO of Graanul Invest, a major Estonian forest owner and Europe’s largest pellet producer, swiftly rushed to his defence. Kirjanen demanded that state funding for Estonian environmental NGOs should be cut, because of our “destructive tactics” towards the country’s forestry sector.

Today, Marku Lamp still holds his important position, but more environmental organisations have joined the call for his removal.

For Graanul Invest meanwhile, times have been turbulent.

The unsustainable nature of Estonia’s biomass has been highlighted in its largest export markets – Denmark, the Netherlands and the UK, as well as in German media. But this isn’t the only problem Estonia’s biomass industry has faced. At the last meeting of the committee deciding the next decade’s development plan, Estonia’s Ministry of Economy and Communications said that wood pellets are not an economic priority.

However, the plan’s steering committee was later disbanded by the new National Conservative minister, sparking a barrage of criticism from those who see it as a move to force a development plan that will rely heavily on industrial scale forest exploitation. Only a few days later, Kirjanen was appointed as the next Chairman of the Board of Timber Estonia, the local wood industry lobby organisation. Last week it also became public that the European Commission supports Estonian 450 million renewable energy transition plan, which in the past decade has overwhelmingly meant support for domestic wood energy – the state energy company’s long-term plan is to start burning up to 3 million cubic meters per year, in addition to today’s volumes. Just before Christmas a new legislation project is also being rushed which would subsidize shelterwood compartment cutting on semi-protected areas, including Natura areas.

The industry lobby itself has also been hitting back hard. An article in the Estonian media accused those criticising woody biomass in order to protect Estonian forests, as “furthering the interests of Gazprom” (the Russian energy company), though Estonia’s media regulator later found that the article was guilty of violating four journalistic principles.

Local campaigners have responded by becoming more professional and numerous, and turning to the courts to protect their rights.

The state forest manager, as the largest forest owner, is legally required to consult locals, but this has not significantly improved and the head of the SFMC has been elected vice-president of EUSTAFOR, the association of European state forest management organisations. It seems there is a systemic problem across Europe with state forest managers siding with industry over the state. Where they should be pushing for stronger biodiversity targets and just transition measures for forest workers, they instead try to get biodiversity protection strategies weakened.

This is a problem which cannot be solved through certification as certifiers’ views remain at odds with those of civil and environmental groups, who have seen increased logging on semi-protected areas and near settlements since 2015.

In more positive news, the Estonian Supreme Court has just granted legal protection to about 100 hectares of wood grouse habitats until it can be decided whether logging would damage wood grouse populations. A positive verdict could have far-reaching consequences for Estonian forest management and conservation.

The Estonian Fund for Nature recently confirmed that it has filed a complaint with the European Commission regarding logging on protected Natura 2000 areas. The Commission is said to be seriously considering bringing an infringement procedure against Estonia, which would halt all logging on Habitats Directive areas until it becomes clear whether the directive has been fully adopted into Estonian law.

All those problems, together with ongoing suspicions that Estonia has been falsifying forest data indicates a need to update and overhaul EU regulations on conservation and forest management, as Estonia is not an exception, but just an extreme case of the dire political manoeuvring helping drive the degrading and destruction of European forests.