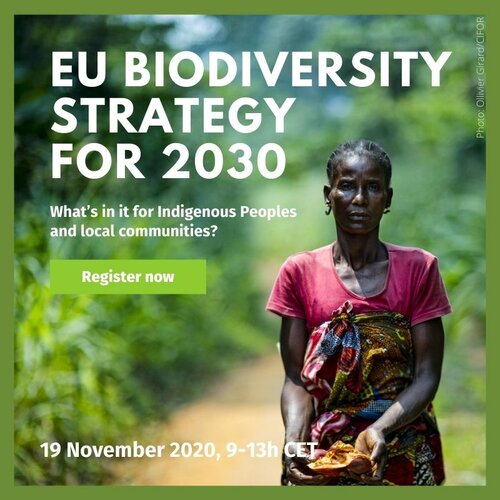 Recordings of the  event with interpretation  in English, French, Spanish and Russian are available.

Faced with the urgent need to restore biodiversity and reduce the effects of the climate crisis, international institutions are focusing on extending protected areas.

In its 2030 Biodiversity Strategy, the European Commission proposes to transform at least 30% of Europe's land and sea into protected areas. Biodiversity will also receive greater attention at the international level. With the NaturAfrica initiative, the Commission vows to protect nature in Africa while promoting the role of non-state actors and Indigenous groups in this process. But how will Indigenous Peoples and local communities be involved?

Many examples show that upholding territorial rights and enabling local communities to manage their land is the best strategy to protect biodiversity, but land grabbing, the human impacts of conservation projects and abuses by eco-guards continue to make headlines. There are thus increasing calls for a radical change in the design and management of conservation programmes. What nature conservation model will the EU develop for 2030?

Ahead of EU Biodiversity Strategy discussions, this conference brought together representatives of Indigenous Peoples and local communities in Africa, Asia, Latin America and Russia, NGOs, European Commission officials, and MEPs.

French, Spanish and Russian version of the conference are also available.

Members of the European Parliament (MEPs):

10h30–11h30: Recommendations and priorities from indigenous peoples and local communities