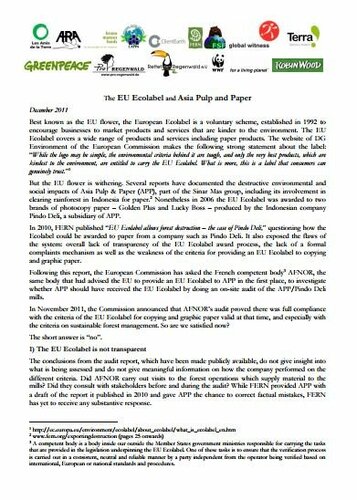 In 2006 the EU Ecolabel was awarded to two brands of photocopy paper – Golden Plus and Lucky Boss – produced by the Indonesian company Pindo Deli, a subsidiary of APP. In 2010, FERN published EU Ecolabel allows forest destruction – the case of Pindo Deli, questioning how the Ecolabel could be awarded to paper from a company such as Pindo Deli. It also exposed the flaws of the system: overall lack of transparency of the EU Ecolabel award process, the lack of a formal complaints mechanism and the weakness of the criteria for providing an EU Ecolabel to copying and graphic paper.

Following this report, the European Commission has asked the French competent body AFNOR, the same body that had advised the EU to provide an EU Ecolabel to APP in the first place, to investigate whether APP should have received the EU Ecolabel by doing an on-site audit of the APP/Pindo Deli mills.

In November 2011, the Commission announced that AFNOR’s audit proved there was full compliance with the criteria of the EU Ecolabel for copying and graphic paper valid at that time, and especially with the criteria on sustainable forest management. This statement from fourteen NGOs, explains why this is not a satisfactory conclusion and what needs to happen next in order to stop the EU flower from withering further.