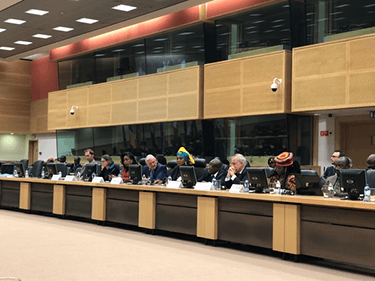 A more ambitious plan is needed to protect forests and meet people’s aspirations in the second-largest rainforest in the world. Governments, civil society and the private sector convened in Brussels, 27 - 28 November 2018, for the 18th meeting of the Congo Basin Forest Partnership (CBFP). The “Brussels Declaration” that they adopted left many civil society participants unsatisfied.

The declaration rightly emphasises that illegal logging and other illegal exploitation of land and natural resources constitute a growing menace to the Congo Basin rainforest and to the livelihoods of inhabitants, undermining the rule of law and stability. Congo Basin partners also call for stronger support to the Nationally Determined Contributions to the Paris Climate Agreement.

However, the declaration fails to provide a clear plan for how to tackle the multiple threats facing forests, including improving governance and strengthening rights. It also fails to urge governments in the EU and forested countries to do more to make the Forest Law Enforcement, Governance and Trade (FLEGT) Action Plan tackle deforestation and climate change. Such vagueness invites inaction and could aggravate the multiple challenges linked to the growing demand for natural resources, especially from Asia.

The CBFP is a multi-stakeholder partnership enabling members to collaborate to preserve the Congo Basin forests and promote inclusive and sustainable growth in the region.

Fern, a member of the CBFP, co-hosted two side-events during the meeting  – at Palais d’Egmont to demonstrate the contribution of community forestry to local development and community’s wellbeing, and on what the new EU multiannual financial framework would bring to tropical forests and local livelihoods at the European Parliament.

At both, it was clear that citizens from the Congo Basin and the EU rely on the CBFP and its EU members to increase their ambitions in 2019, to ensure that fighting deforestation, protecting forests peoples’ rights and meeting climate challenges receive adequate support. By doing so decision-makers would listen to the aspirations of people who live near these forests and respond to increasing numbers of citizens around the world calling on their governments to take more meaningful action for the climate and the planet. We would all stand to gain.