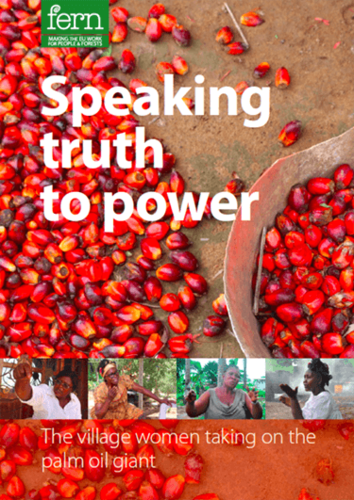 The Société Financière des Caoutchouc (Socfin) group is among the world’s biggest independent plantation owners, managing 187,000 hectares of mostly oil palm and rubber plantations in Asia and Africa, where it has been operating for more than a century. Meanwhile controversy of various kinds has dogged Socfin in recent years.

Socfin's local subsidiary Socapalm has been accused of threatening primary forests; its operations are said to lack transparency; and it has been blamed for land grabs, with land owners and village leaders reportedly pressured into signing agreements and local people not consulted when the company has taken land. In Cameroon a bitter land rights struggle has unfolded between villagers and Socfin’s local subsidiary Socapalm, which owns six palm oil concessions in the country.

Award-winning Cameroonian journalist Madeleine Ngeunga and Fern’s Indra Van Gisbergen visited villages in the shadow of two of Socapalm’s oil palm plantations, to see if the problems driving a dispute between locals and the company are being resolved.

Their findings offer a vivid snapshot of life there and raise disturbing questions for Socapalm, revealing that the chasm between many locals and the company appears no closer to being bridged.