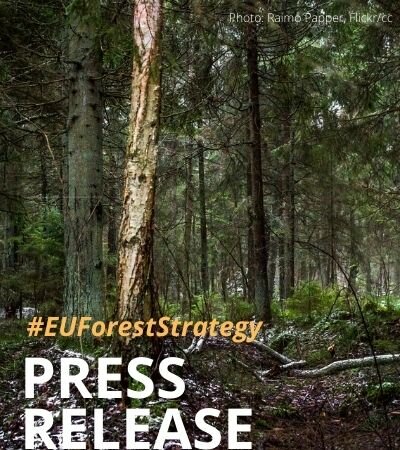 Recognising the importance of forests in the fight against climate change, the European Commission released its new Forest Strategy as part of the Fit for 55 package. It provides the first holistic European vision for how to ensure forests will help tackle the climate crisis rather than contribute to it. It contains some encouraging elements but remains too timid to address the huge increase in forest destruction that Member States have planned, a hike that is already visible from satellite monitoring. This destruction is fuelled by increased demand for wood, which is partly driven by the EU’s Renewable Energy Directive.

“For the EU to achieve carbon neutrality by 2050, healthy, diverse forest ecosystems must flourish.

While the Forest Strategy includes some steps to better monitor and plan for forests, it cannot address the gargantuan demand for wood driven by the Renewable Energy Directive and the unfettered promotion of the bioeconomy. The proposed remedies are too timid to face up to the challenge.”

An early leak of the Forest Strategy was met with outcries from the logging industry as well as Agriculture Ministers from 11 countries. They asked the Commission to go back to the drawing board. 1,500 foresters and practitioners and 80+ NGOs, including Fern, called on the Commission to maintain a stronger focus on biodiversity and climate change. A similar message was given by the Environment Ministers from Slovakia, Germany, Spain and Finland.

Kelsey Perlman added : “How can EU Member States call on countries such as Indonesia and Brazil to stop deforestation, but then push back against the simple notion of monitoring logging in Europe? By opposing the European Commission’s initial Forest Strategy, Agricultural Ministers across Europe showed they are in denial about the tragic state of European forests.”

Until now, the EU has only received data linked to forest biodiversity in protected areas. EU Member States compile similar data on all EU forests, but they do not share it. This lack of transparency prevents stakeholders from having a comprehensive understanding of the impact of industrial forestry.

The final Forest Strategy proposes to remedy this problem with a new EU Forest Observation, Reporting and Data Collection law. This could set the ground for a much more informed and healthier debate on the state of EU forests. Unfortunately, following intense lobbying, the Commission is no longer linking this law to binding indicators which would make it possible to track the health of all forests. To restore Europe’s forests and start restoring biodiversity, the EU will need to move from monitoring to mandatory action, and Fern looks forward to working with all EU institutions to achieve this necessary step.

The Forest Strategy also recognises the EU’s role in causing – and tackling – illegal logging and global deforestation, and commits to stepping up existing tools such as the EU Timber Regulation, as well as developing additional legislation to prevent deforestation from agricultural commodities such as beef, leather, palm oil, soy, cocoa and rubber.