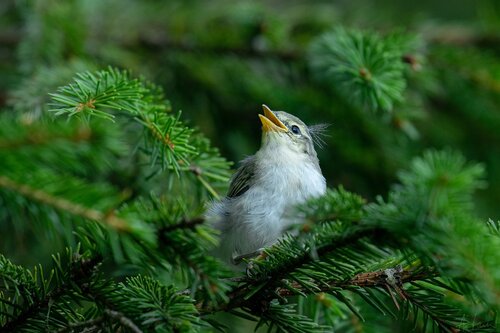 Estonian environmental NGOs have had enough of being outgunned as they stand up to a mighty timber industry and some of its powerful government friends. In November 2019, several environmental NGOs sent a letter to the Minister of Environment (MoE) and its general secretary alleging that Deputy Secretary of Wildlife, Marku Lamp has undermined Estonian conservation and abused the powers of his office, and demanded his removal.

The letter mentions various instances of forestry practices favouring industry, but the one that provoked the organisations was the western capercaillie, protected under the EU Birds Directive.

An Environmental Board in western Estonia proposed a 7000-hectare protected area, the Kõveri-Ilvese Western Capercaillie Preserve, in part to ‘compensate’ for the construction of the Rail Baltic railway that negatively affects certain Natura 2000 areas. The State Forest Management Centre (SFMC), responsible for managing about 47 per cent of the country’s forests, made a counterproposal to the Environmental Board’s plan: to protect 254 hectares and leave ~6700 hectares open for logging.

Deputy Secretary of Wildlife, Marku Lamp, accepted the SFMC’s proposal entirely; the Environmental Board’s proposed borders around the protected area, which referenced expert studies in scientific literature, were rejected as insufficiently justified and removed. Ornithologists later obtained an increase in the protected area – up to 12 per cent of the Environmental Board’s original proposal.

Mutual support between the timber industry and authorities is not new. In 2011, the Estonian Parliament approved a controversial and widely protested Estonian Forestry Development plan that the National Audit Office had suggested it reject; in 2013 requirements for clear-cutting were relaxed, and in 2015 Parliament approved a Forest Act Amendment further easing logging restrictions.

A 2017 OECD report states that Estonia is felling its forests at 91 per cent of productive capacity, second only to Belgium. Based on a government’s carbon transition study, Estonia is currently logging almost 50 per cent more than is sustainable for stable wood use and the carbon sink.

The environmental situation would be worse without external rules such as the EU Habitats and Birds directives and the standards of the Forest Stewardship Council (FSC), yet difficulties arise even here.

Problems exist with Estonia’s implementation of provisions of the Habitats and Birds Directives; because of this, violations are not rare. In Natura 2000 areas, while strictly protected areas are respected, excessive logging takes place in semi-protected areas. Clear-cut areas of two hectares are allowed, as are other types of regeneration cuts, which often have a similar ecological impact to clear cuts. Kaido Kama, the advisor to the National Audit Office, stated that the pressure on conservation areas was likely increasing; he was abruptly fired.

Estonians love their forests, and are fighting back

The timber industry may wield a great deal of power, but the Estonian public also feels strongly about their forests. Recent years have seen intense public debate on forestry, given the significant rise in logging. Research by Tallinn University in August 2018 showed that 77 per cent of Estonians want to see logging volumes reduced. Estonia’s grassroots culture may not yet be strong but it is growing steadily, and has achieved some impressive local advances.

Ohtu village locals, for instance, might provide a model about how key or priority habitats can be used to defend their public forests. As seen here in the case of Pihu forest of Ohtu village, the community arranged their own consultation meeting. They stood up to the SFMC’s “pre-decided” plan to clear-cut an “optimal stand”, challenging the SFMC’s inventory of key species (which the SFMC representative did not have to hand). First through local knowledge, and then confirmed by a specialist, the community had recorded the presence of a key biotope and insisted they be allowed to carry out their own inventory, across a full cycle of seasons, of protected species. The villagers were given a year to present their own plan, and appear ready to take stronger action if it goes unheeded.

Rules protecting key habitats may provide locals with a useful tool. In response to long-standing problems – insufficient inventories, frequent changes to the rules creating legal uncertainty, Deputy Secretary Lamp making registration of key habitats in private forests voluntary in 2017 – in January 2019, the SFMC took up the inventory of such habitats process that had stagnated for 15 years.

The FSC has helped, producing a map of all potential key habitats; in order to retain certification, the wood products industry began rejecting wood that came from plots with possible key habitats.

The situation remains tense. Small environmental advances are far from complete, and the future is uncertain. Whether consultations will be carried out in good faith, rather than in a spirit of avoidance, and the quality of the SFMC’s inventories remain to be seen. Environmental organisations have a difficult time bringing their cases to the media, given that a chill has been cast on reporting. No response has been received regarding the fate of Deputy Secretary Lamp, and commercial interests remain powerful.

The EU must do more to help. What is happening in Estonia is symptomatic of of many of the pressures our forests face today, and of the possible solutions that greater community control could offer. For a country with receding carbon sinks, removing EU subsidies for burning woody biomass would be a start. A stronger EU presence and increased scrutiny and support for participative processes would help send a clear message. And where such processes are infringed, stricter enforcement of EU directives is needed from the EU Commission, the FSC and the European public.