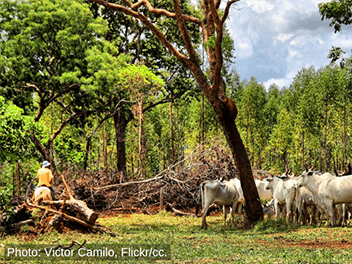 After 20 years of negotiations, the European Commission and Mercosur, a trade bloc composed of Brazil, Argentina, Paraguay and Uruguay, have settled on a free trade agreement that has provoked deep concern for the fate of forests and forest peoples.

This deal will allow more tariff-free imports of beef, poultry and ethanol into the European Union (EU) while facilitating EU exports of cars, machinery and chemicals. Jean-Claude Juncker welcomed the news as a “historical moment”, dubbing it an answer to current “international trade tensions”.

Environmental organisations, farmers, as well as many members of the European Parliament across various political groups have expressed alarm over the devastating impacts that this agreement will have on forests, indigenous peoples’ rights, climate change and small-scale farmers.

Concerns are most acute for Brazil. Since Jair Bolsonaro became the country’s president, his government has dismantled environmental protections; incursions by armed invaders on indigenous peoples’ lands have surged; and deforestation rates have risen, as evidenced by a new report showing an increase of 60 per cent in June 2019, compared to June 2018.

In the last weeks of the negotiations, 340+ civil society organisations sent a letter to the Commission urging the EU to halt trade negotiations with Mercosur, because of these concerns.

The EU-Mercosur deal was finalised despite the European Commission’s failure to carry out an up-to-date analysis of the deal’s potential social, human rights and environmental costs based on scenarios that are adapted to the current negotiating framework. The 2007 impact assessment is not applicable to the Agreement that was just finalised. This contradicts a 2016 decision by the EU Ombudsman on the EU-Vietnam free trade agreement stating that the Commission should “carry out a human rights impact assessment in the preparation phase of the Free Trade Agreement and not after the Free Trade Agreement enters into force”, and that its refusal to do so was “maladministration”.

The EU has pledged to halt global deforestation by 2020. In its 2015 Trade For All strategy, it also commits to using trade agreements as levers to promote sustainable development and human rights.

Brazilian reports have indicated that the deal’s Trade and Sustainable Development (TSD) chapter includes a “precautionary principle” clause that would allow countries to block the import of products whose production is suspected to originate from illegally deforested areas.

The publicly available EU proposal for the TSD chapter (March 2017) does mention, in article 11, that “when establishing or implementing measures aimed at protecting the environment or labour conditions that may affect trade or investment, each Party shall take into account available scientific and technical information (…), including the precautionary principle."

The wording is very vague and the TSD chapter lacks enforceable mechanisms. It remains to be seen whether the full text agreed by both Parties, to be published within the coming months, will integrate such a clause.

It will now be up to MS’s national parliaments, as well as the European Parliament to approve the agreement’s entry into force. Fern calls on them to oppose the deal if it fails to include strong and binding safeguards that will ensure that forests are protected, and rights respected.