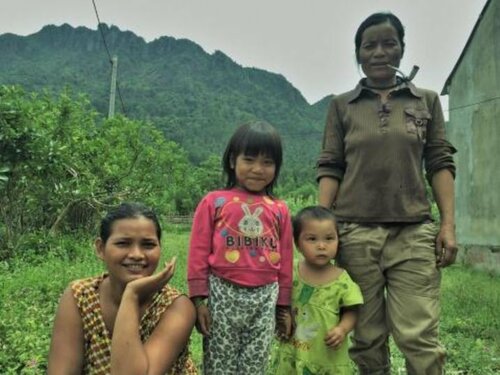 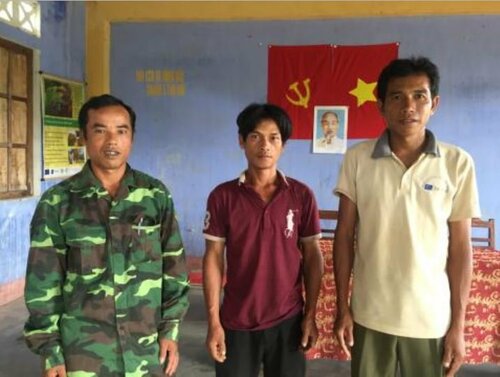 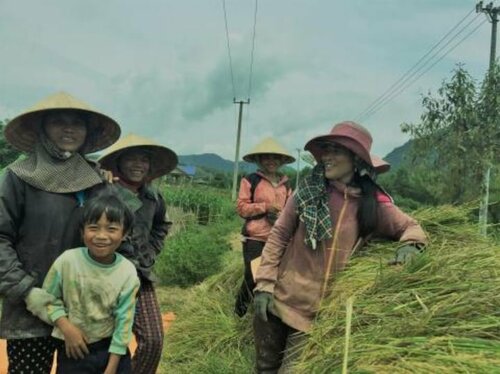 The head of Tan Hoi village sits cross-legged on the floor describing the pressures his people face.

“The older generation lacks education. The younger ones leave school as early as 11. Only one person has ever graduated from university [out of a community of 328 people] as most people don’t have the resources to be able to afford it,” says Lê Văn Bức, a wiry, softly-spoken man in his 40s.

We’re in a community room decorated with environmental posters, the Vietnamese flag and a portrait of Hồ Chí Minh, in a village around ten kilometres from Vietnam’s border with the Lao, which lies in the shadow of a jutting mountain range covered with dense foliage.

It’s a spectacularly rugged terrain. And one which can present deep challenges for those who live off it.

Speaking through an interpreter, Bức continues: “Surviving with very limited resources is a big challenge. The potential for agriculture here is very low, and the total plantation area for the village is small.” So as well as cultivating rice, bananas and cassava, the villagers subsist through their animals - goats, pigs, chickens, cows - and by collecting honey, rattan and bamboo shoots from the forest.

In many ways, the plight of the Tan Hoi villagers mirror that of rural communities the length and breadth of Vietnam: a lot of people eking a living from relatively little, husbanding the natural resources around them as best they can, trying to use the available arable land productively without destroying it.

It’s a struggle compounded by the dizzying rates of deforestation and forest degradation that blighted Vietnam over past decades - and which have reduced biodiversity, decimated many of the protective canopies which stop torrential rain from eroding the soil, and razed the forests which guard against floods, drought and silting.

Forests have been cleared – often illegally - for agriculture, not just to feed the population, but to meet export demands (for instance, in less than ten years, Vietnam has gone from nowhere to being the world’s second largest coffee producer). They have also been cleared to construct dams and other large-scale infrastructure projects, as well to feed the international furniture market.

Then there’s the legacy of war. From 1962 to 1971 the United States’ Air Force sprayedmore than 80 million litres of defoliant chemicals - including Agent Orange – on hardwood forests, mangrove jungles and vast swathes of cropland to destroy the canopies where the North Vietnamese troops and Viet Cong were concealed, and to deny them food.

Tan Hoi village sits inside the A Shau Valley, site of the Hồ Chí Minh trail, a strategically vital network of routes used by the Viet Cong to funnel supplies and soldiers. As such, it was a major battleground and target for the US’s chemical assault.

It was in the aftermath of the war that Tan Hoi village’s inhabitants, who are from the ethnic minority Paco group, were first settled here by the Vietnamese government. The Paco’s traditional belief system holds that everything in nature has a soul, and the spiritual world is anchored in the landscape around them.

Recently, hopes have risen for a future in which the natural environment they see as sacred is protected for future generations.

From October 2014 until earlier this year, the Tan Hoi villagers took part in a community-based forest management scheme supported by local NGOs, researchers and the provincial Forest Protection Department.

The project was run under the aegis of the European Union’s action plan for combatting illegal logging, which includes so-called Voluntary Partnership Agreements (VPAs) between the EU and timber-producing countries.

VPAs aim to end illegal logging by attacking its root causes, including corruption, power imbalances and a lack of clarity over land tenure rights. As the world’s first timber trade deals negotiated with the participation of civil society groups - including forest peoples - they are unique.

Almost seven years ago, Vietnam and the EU starting negotiating a VPA – and on May 11, they reached an important milestone in fully implanting and ratifying it, when the deal was initialled.

However, there have been some serious criticisms of shortcomings in the negotiation process, underlined by a damning recent report by the Environmental Investigation Agency (EIA) on the vast quantities of illegal timber flowing across the border from Cambodia into Vietnam with the apparent complicity of government authorities and military personnel.

Unless these issues are addressed, many say the credibility of the final VPA between Vietnam and the EU will be fatally damaged.

Yet the example of Tan Hoi village shows its potential.

Bức, who as well as being head of the village leads one of its two forest protection teams, says: “The VPA project has brought us benefits. Some people have been given small loans to improve their livelihoods through husbandry and farming. Forest protection and management plans have been introduced. So people understand that they have to protect the forest and not cut it down to make way for plantations, and the problem of land clearance for agriculture is under control.” Illegal logging in the area has also reduced.

“Villagers know they must have a land use rights certificate [which proves the legality of their goods], and which gives them a better negotiating position with traders. Because people didn’t understand the laws before, it was easier for them to be cheated and for traders to drive down the price. Now they know their goods have no problems,” he says.

Thriving from their limited natural resources over the long term remains a formidable challenge, just as it does for numerous forest communities across Vietnam. The chances for them to prosper though, will be greatly enhanced if the country’s VPA with the EU succeeds.

Fern’s new briefing Vietnam’s Voluntary Partnership Agreement (VPA) with the EU is here. A conference on the future of the EU’s action plan on illegal deforestation takes place in Brussels this week. See: http://illegallogging-deforestation-conference.eu/