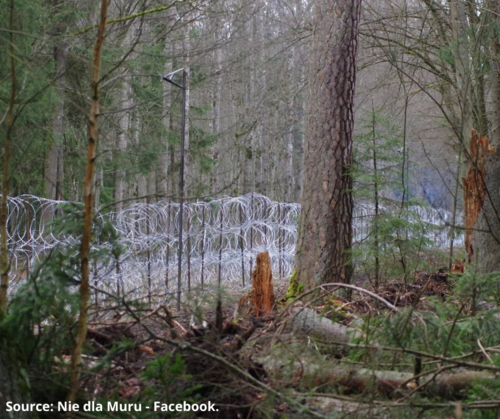 During the first four weeks of the Russian invasion on Ukraine, more than two million refugees fled Ukraine, finding shelter in Poland. The Polish government opened the borders to Ukrainian refugees granting them access to free health care, public transport and financial help, and Polish citizens opened their doors, hosting Ukrainian families in their homes. Yet a hundred kilometres to the north, the same government is building a wall made of steel, concrete and razor wire, 186 kilometres long and more than five metres high, with the apparent aim of stopping 20,000 refugees from crossing Poland’s border with Belarus. These people are also fleeing wars – in Afghanistan, Syria, Yemen and Ethiopia. What is the difference between them and tens of thousands Ukrainians coming to Poland every day? According to the conservative government, these 20,000 refugees pose a threat to national and EU security. According to NGOs, locals and scientists, it is the wall that poses a threat – to human rights, the local economy and the environment, including Natura 2000.

Although the plight of refugees is at the forefront of everyone’s mind now, before the Russian invasion of Ukraine, environmentalists were already warning that the barrier would disrupt a key ecological corridor in Europe.

Passed in November 2021, the special law that approved the wall exempted the project from a variety of legal requirements relating to construction, water and environmental issues. Consequently, no environmental impact assessment was carried out, although the wall will cut across seven Natura 2000 sites, including Białowieża Forest (FW 233). The EU Habitats Directive requires impact assessment in such cases, however, so a Polish NGO, Naturalist Club, filed a complaint with the European Commission the same month; other NGOs later complemented the complaint with additional information.

On 8 February 2022, more than 150 organisations from 25 countries joined the NGOs, calling on EU institutions to intervene “to immediately halt the construction (...) as a socially and environmentally harmful project that violates the requirements of the Habitats Directive”. In addition, 1774 members of the global scientific community asked the Commission to postpone the construction “until an environmental impact assessment of this project on the coherence of the Natura 2000 network is carried out in accordance with European law and nature conservation requirements.”

The impacts of this wall will likely be grave for wildlife and ecosystems; and for exhausted migrants, they could well be fatal. The barrier’s many opponents are counting on the Commission’s speedy reaction. Construction, to be carried out in three shifts 24 hours per day, had already begun before the Ukraine invasion and was set to be completed by summer. Even though there are more pressing needs, and the roughly €340 million could be spent to help the refugees coming to Poland, the government continues the investment.